I was discussing with some friends who might become the next German chancellor, following Angela Merkel (CDU). The candidates in question are Armin Laschet (CDU), Olaf Scholz (SPD), Annalena Baerbock (Bündnis90/Die Grünen).

Baerbock is the youngest candidate in this election (*1980). Laschet (*1961) and Scholz (*1958) are closer to Angela Merkel’s (*1954) age. I was curious how much younger (or older) the previous successors to the chancellor have been when entering the office. In this little study I included even Robert Habeck *1969 (Bündnis90/Die Grünen) und Markus Söder *1967 (CSU) as they are regularly referred to as the better candidates for their party.

I used a copy of this table but removed the last three columns and added year of birth and death. The age is therefore not 100% exact and can differ by up to one year, but that’s ok for my quick analysis.

If Baerbock becomes chancellor, she’s by far the youngest chancellor Germany ever had. Laschet and Scholz are considerably older and are in the older third of the selection. 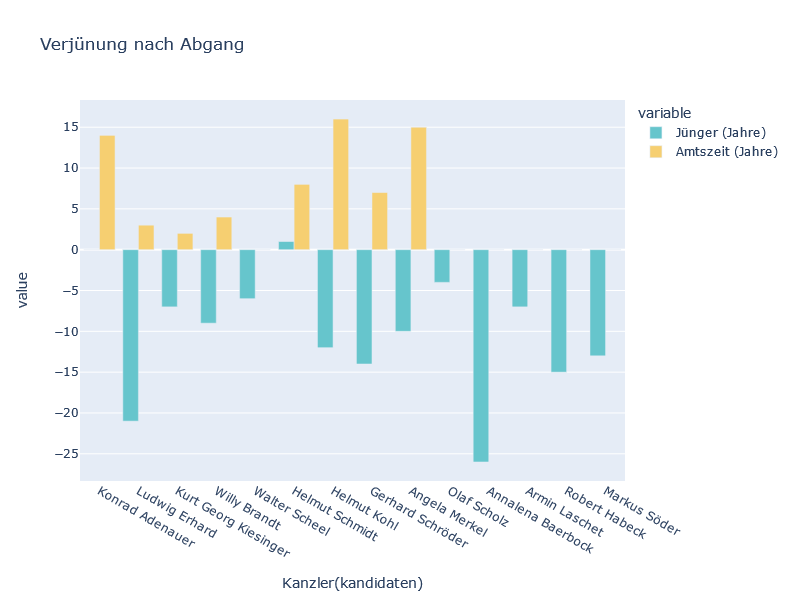 This plot shows the length of a chancellorship compared to the age difference of the successor to the predecessor. So basically it shows the age of the chancellors when the come into office compared to the age of the predecessor when they leave office. For example Gerhard Schröder (SPD) was 14 years younger than Helmut Kohl (CDU). What I noticed is that longer sitting chancellors usually had a bigger age difference to their successor. That’s no surprise at all, as chancellors are human too and age during their time in office. That would point towards Baerbock, but even Habeck and Söder would have fulfilled that hypothesis. Helmut Schmidt is the only chancellor that was older than his predecessor, Walter Scheel (FDP), but as Walter Scheel was only in office for 9 days you can compare his age to Willy Brandt (SPD) instead.

The dataset is obviously too small to make any real conclusion. It was more of a python exercise than a real analysis, so treat it like that! The source file and python code can be found here

UPDATE 2021-09-05: I replaced the second graph to make it more representative and to have it in the right order.